The Most Inspirational Story You’ll Read All Week 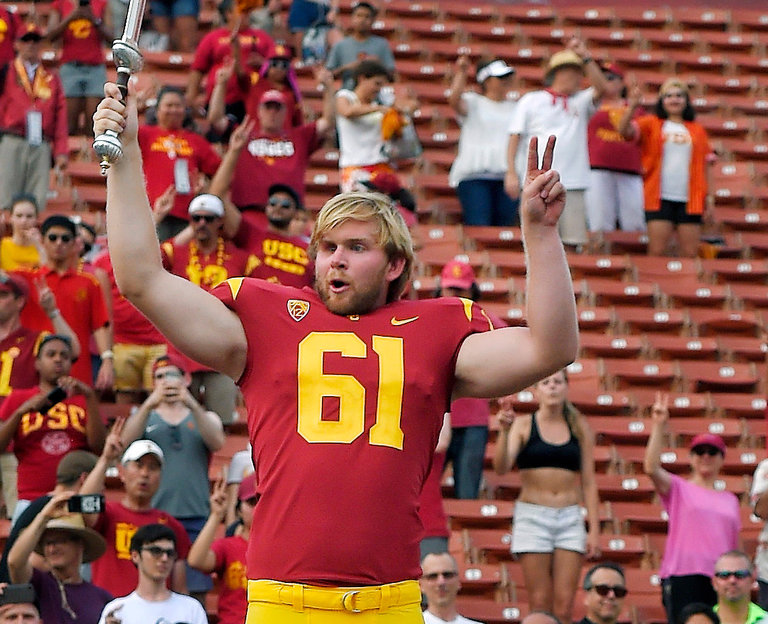 The Most Inspirational Story You’ll Read All Week

With the exception of golf, football is the sport I follow most closely and this weekend provided quite a bit of excitement with the first weekend of college football.  Alabama beat a very good Florida St. team and made it look like we will continue to see them in the championship game. Josh Rosen shook off some poor play early to guide UCLA to an improbable 34 point comeback win against Texas A&M.

Yet with all the incredible games being played, the most inspirational part of the opening college football weekend came when USC long snapper Jake Olsen entered the game in the 4th quarter. With USC up 48-31 over Western Michigan, Olsen executed a perfect snap that led to the extra point that sealed the win for the Trojans.

So why is this inspirational?  Well, Olsen has been legally blind since the age of 12. He was born with cancer of the retina and this was the first time that Olsen had ever entered into live action on the football field.  He earned a walk-on spot at USC, which is no small feat in itself, but to be able to make his dream come true is truly something to marvel at.

I was intrigued by this story from the very beginning, as I had heard about Olsen well before he made the play of the week on Saturday. I was even more interested as I sat listening to Olsen on the Dan Patrick show this morning.

You see, Olsen is not just a long-snapper, but an avid golfer as well.  When Dan Patrick commented that Olsen was an excellent golfer who shot in the 80’s consistently, Olsen was forced to interject and correct him. Olsen actually shoots in the 70’s consistently, which to me is a much more difficult feat than executing an extra point snap. I am not taking anything away from the incredible moment, but anyone who plays golf knows how difficult it is to break 80 once, let alone consistently.

I have seen blind golfers who have excellent technique and hit the ball exceptionally well. But think of all the times that you have taken your eye off the ball in the middle of a great round. Maybe your shot ends up ok, but more often than not, it ends up costing you at least a stroke. To regularly break 80, you have to have a very good all-around game, and you have to be able to score around the green. I tried imagining what it would be like if I was unable to see the breaks in the green, or use my depth perception to hit a pitch tight into the pin.  As someone who breaks 80 around 20% of the time I play golf, I don’t know if I’d break 100 if I was forced to play without my sight. And I mean that after practicing for a while, as my sight is something I use so often around the green. That may sound obvious, but I am not just talking about seeing where the pin is, and gauging yardage. I’m talking about all of the times you have to feel a shot with your eyes.

So with this in mind, I challenge you the next time you go to the driving range. Pick a spot where you are far away from other golfers, and try to hit the ball with your eyes closed. Then try it again, and again and again. After a while you will start to get a feel for where the ball is, but that is on the driving range. Imagine hitting off a side-hill lie? Just getting your feet in the correct position is a big part of the shot, and that comes from gauging where the ball is in relation to your setup.

Jake Olsen is an inspiration to a nation of football fans, but also has captured the imagination of a nation of golf fans as well. I hope to see Jake play in some charity tournaments where he can really make a difference and be an inspiration to those who are blind. Golf is a wonderful game and I hope Jake Olsen offers a bit of hope to those who are blind and want to participate in this great sport.