The Northern Trust Open Preview, 1st Round Matchups and Futures 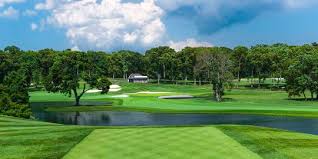 Course Architect:  The Glen Oaks Club was originally designed by Joe Finger and opened for play in 1971. The course remained unchanged until 2011, when course Superintendent Craig Currier, along with Joel Weiman, led a renovation/redesign that was completed in 2014.  The results were incredible, as Glen Oaks won the Metropolitan Golf Writers Association 2015 Club of the Year, a very prestigious award considering the courses they were up against in the NY Metro-Area.  Currier has quite an impressive resume. He was the man responsible for getting Bethpage Black in the type of shape it needed to be in to host a US Open (twice), which was a daunting task at the time. It is really cool to see a guy who started out as a traditional course superintendent, be in the position to improve a golf course architecturally on the level that it is now hosting a Fed Ex Cup event.

Course Stats:  Glen Oaks is a unique course for the Fed Ex Cup, as there are actually three separate 9-hole courses at the club. The pros will be playing a composition of the three courses, and the official length this week is 7,346 yards and will be played as a par 70.

Course Features:  Glen Oaks is a very interesting course from the perspective that it doesn’t have a specific feature-set that lends itself to be called a links course, or a parkland course, or even a hybrid of two. From what I have seen and heard about The Glen Oaks Club, the best way to describe it is “ultra-private”.  The course conditions are as good as any course the PGA Tour plays, with the exception of perhaps Augusta National, which is fitting considering Glen Oaks is referred to as the Augusta National of the North.  This name was given to Glen Oaks as it shares some lineage with the Masters host course, specifically course Superintendent Craig Currier, who oversaw the clubs major renovation in 2011 along with Joel Weiman.  Currier spent two winters early in his career working at Augusta National, and he credits the experience with helping him during Glen Oaks design transition.

Prior to the major renovation in 2011, Glen Oaks was a very tight, tree-lined course that was short on strategy and long on repetition. While the conditioning was always favorable, it lacked the type of memorable holes that could provide enough drama needed to host a Fed Ex Cup event.  Over the course of three years, Currier and Weiman removed roughly 1,000 trees (aided of course by Hurricane Irene). The result was something that neither man could have properly envisioned when they had started the process. Instead of a tight track that emphasized driving accuracy, Glen Oaks was now a raw template of open and expansive property, essentially a blank canvas for Currier and Weiman to fill in as they saw fit. It was a great example of addition b important y subtraction, as the design duo were now able to create strategic holes without changing the routing because the tree removal had opened up alternate sightlines on every hole.  With Shinnecock Hills and the National Golf Links of America not far to the East of Glen Oaks, Currier and Weiman decided on sharp contrasting, meaning there would be no rough between the fairway and the fairway bunkers. Similar to Augusta, you really get to see how crisp the edges of the bunkers are when they are mowed down to the same length as the fairway.

On the strategy side, the new-look Glen Oaks Club will favor the players who can drive the ball exceptionally well this week.  While the fairways are open and inviting, there is still trouble lurking not that far off many of the fairways.  The composite course will play to a par 70 with only two par fives, but the important thing to note is the length of the par 4’s. According to the composite setup on PGATour.com, the par 4’s average 445 yards in length, but that number is on the low side as the holes will play longer than the yardage. This gives the big hitters a big advantage if they can keep their ball in the fairway.