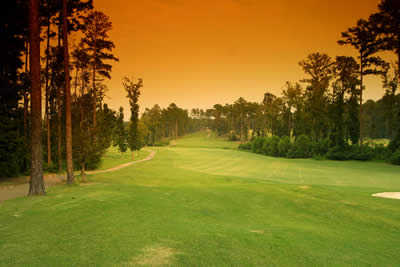 Course Architect:  Quail Hollow was designed in 1961 by George Cobb, and the goal was to capture the beauty and challenging terrain of the Piedmont region of North Carolina.  Over the years the course has seen several renovations and redesigns, first by Arnold Palmer in 1986, followed by Tom Fazio in 1997 and then again in 2003.

Course Grass: Quail Hollow did an extensive renovations of its greens, tearing up old Bent grass surfaces in favor of the new rage, MiniVerde ultra dwarf Bermuda.  The new greens made a huge difference in its first edition, with total putting down several strokes on average.   Rory McIlroy shot the course record with a 61 in the third round of the 2015 Wells Fargo Championship.  While Rory is capable of shooting 61 nearly anywhere in the world, especially at a course he has dominated like Quail Hollow, the fact that it came in the 3rd round was the most telling part to me. In previous seasons, the greens were bumpy and as the tournament progressed they became very crusty, making it nearly impossible for a player to sink enough long putts to ship a 61 on Saturday.

Course Stats:  Quail Hollow is a par 72, and will be stretched out to play a little over 7600 yards this week. There are three par 4’s that measure over 500 yards, and all three are heavily fortified by bunkers that guard undulating greens. You may think the presence of the 8th (346 yards) and 14th (344 yards) holes counterbalance the length of the remaining par 4’s, but that would be short sighted, as both holes contain enough trouble to bring double bogey into play.  Quail Hollow is also different from many par 72 layouts in that it only contains three par 5’s and two of the three bring water into play off the tee and on the approach. To put it mildly, Quail Hollow is a very difficult test of golf that will challenge every club in the bag, but especially ones ability to be accurate with the driver.

Course Features:   In anticipation of the PGA Championship, all of the surfaces at Quail Hollow—from tees to fairways to greens—will be reseeded, and that means excellent conditions for the players.  Although there is precedent (Pebble Beach namely), it is somewhat rare for a regular tour event to host a major championship, but Quail Hollow has the type of setup that can be tweaked depending on the type of event that is being played. Much like US Open setups, the PGA Championship prefers longer layouts with penalizing rough, and this year will be no different.  Reports from Quail Hollow have the Bermuda rough as thick and sticky, meaning players will have difficulty controlling their trajectory on approach shots, as well as judging the spin from shots played around the green. While I don’t think this favors a particular player, I am reminded of European players who are forced to develop a wide variety of shots from the around the greens while playing Links golf. Quail Hollow will never be confused with a links layout, nor would it have characteristics common to a track like Pinehurst where collection areas surround punch-bowl shaped greens. If you were to take out the length, and just look at the width of the fairways (thin) and the green complexes (well bunkered with undulating surfaces), Quail Hollow would look like many top tier PGA Tour venues. However, when you add in the length, players are now being tested in every phase of their game, with none more so than their ability to keep the ball in the fairway.

The last three holes at Quail Hollow are nicknamed “The Green Mile” due to their difficulty and increasing length.  Aside from 16, 17 and 18, the beginning 15 holes are fair and if a player were to go on a Rory-like run, a sub 65 round is certainly possible.

If there was one type of player that would be set up for success this week, it would be in the class of Rory McIlroy, Dustin Johnson, Jon Rahm or Brooks Koepka.